Peace-of-mind & the “Collapse Of Science”

Look around the world just now, and you have two kindergarten fantasies, Trump and Brexit. They both RELY ON BULLYING to get their own way – just like toddlers do. The difference, as one serial killer told me, is that when a 4-year-old has a tantrum, s/he stamps a foot on the floor, but when they’re 24, which he was then, someone dies. Sound familiar? The root problem is that ‘Science’ has collapsed, so it can’t tell people to grow up. But unless we do, and fast, then a certain Commander-in-Chief could well finish us all off. Who’ll stop him? – certainly not ‘Science’.

Carlo Rovelli is an Italian Quantum Physicist – in his book ‘Anaximander’, he tells us “Science has collapsed”. And the reason it has, is simple enough – no-one can understand Quantum Mechanics. Worse, if you think you do, then according to Richard Feynman “you don’t”. So why don’t more Experts confess?

Mention “Quantums”, and people turn off – they don’t like to admit they don’t understand. But the scientific truth is that nobody does. Nor ever will. Every single item on the nano-scale, such as photons or electrons, are now scientifically incomprehensible. The Law of Science that proves this is called the Uncertainty Principle – the very name is a give-away. Science promised us Certainty – not any more – if you and me want Certainty, we’re going to have to build it ourselves – and fast.

So what does the Uncertainty Principle say? Put simply, it means that the more you know about where a subatomic particle is, the less you know about where it’s going. It’s the best we can ever manage for photo-electrons and their ilk, but it’s grossly inadequate for human beings. We need to find a way of changing “I’ll probably be there for you”, so that it becomes a healthier—“your peace-of-mind relies on you being certain of me”.

PROBABILITY may be all very well when you’re shuffling electrons through our quasi-magical electronics, but it’s fatal for peace-of-mind. What you need for mental security is reliable emotional support – you need to know that those around you will help not hinder. Obvious really, especially when stressed.

My way through is to re-invigorate ‘intent’ – just as ‘indefinable’ but rather more vital, and capable of being vastly more Certain. Think about it – we expect living skin to heal, while we know dead skin cannot. Let’s also expect that we too, can ‘heal’ – especially our troubled minds – oh yesssss. I’ve written this all out in a 6000 word paper – but it boils down to the difference between wild electrons and tame ones – lightning or wheat – the one destroys, the other provides food, else we’d starve. Ready for a bit of mental calisthenics? Try reading The Scientific Evidence That ‘Intent’ Is Vital For Healthcare in the Open Journal of Philosophy, 7, 422-434. doi: 10.4236/ojpp.2017.74022.   Someone has to do something – these bullies and their tantrums could be the end of us. 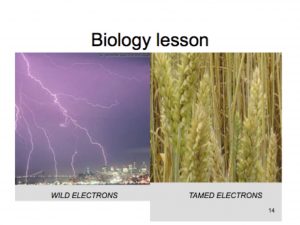